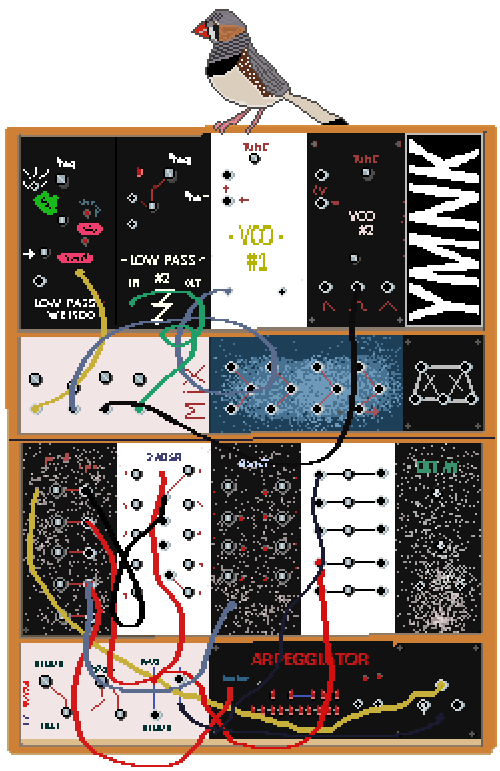 Is it a looper, is it a sequencer? Well I don’t really know. But, it is a super tool for building music from scratch.

The idea of the MIDI looper/sequencer came when I was interested to buy a Arturia Keystep … but I really didn’t like their tiny keyboards. So the goal here was to make something that could behave like the keystep, but in a box, without a tiny keyboard. This way, I could use my own keyboard.

The MIDI looper/sequencer contains up to 128 steps for MIDI notes on 4 channels. By connecting your MIDI keyboard on the input, pressing the “PLAY” button on pushing the note you will record a sequence (or a loop, if you prefer) which will be played for ever and ever … until you erase it.

There is few limitations. Because a lack of times … or a lack of memory in the Arduino Nano … or because I’m too lazy. But limitations are good, cause it’s forcing you to get creative. Right?

– There is “only” 4 channels, which is enough I think for any bleeps and bloops.
– The sequences are mono. It means that one step can only record one note (per channel, of course). If you play another note over one other, it will be replaced.
– There is no note length. Each note is one step and that’s all! I personally manage the length of my notes with the ADSR of my synths.
– The velocity is not recorded. It means that the velocity will always be 127 for any note recorded.

When you record a note, it is automatically quantized to the next step. And what you will hear is the next step playing. This can be a little odd at first, but it allows you to be always on sync. Maybe a more “common” quantization process could be implemented in a next version … I said “maybe”.

Here’s the explanation of each switch/knob/outputs/LEDs :

[PLAY/STOP BUTTON]
Well, obviously, it starts and stop the sequence.
While the sequence is playing, if you press this button while you keep the SHIFT button pressed, the sequence will restart at the first step. It’s a kind of “cue” button.

[ERASE]
When pressing the button, the next notes played on the current channel will be erased. It’s like an eraser. You can just erase a few notes this way and not your complete sequence.
If you press ERASE while pressing SHIFT, it will erase all the steps of the sequence. Kind of “CLEAR ALL”, but on the current channel. There’s no way (right now) to erase ALL the notes on ALL the channels (There’s an easy way to that, just POWER off and POWER on !)

[TEMPO KNOB]
Change the tempo, yeah! Minimum is 40 I think, maximum is 220. You could easily tweak those value in the code if you wanna make some fast hardcore music.

[MIDI THRU SWITCH]
When the switch is ON, the MIDI is playing through the box and the notes are not recorded anymore. This is useful if you want to make a big lead solo over the incredible sequence you just recorded!
BUT : the MIDI channel that you will perform in, will be the channel of the keyboard, not the channel of the MIDI looper/sequencer.

[SHIFT BUTTON]
As seen earlier, it extends the PLAY and the ERASE buttons.
ALSO if you press CHANNEL 1 button while SHIFT is pressed, you will fill all the 128 steps available with the current sequence you have. For instance if you have 1 bars of 16 steps and you do this combination of buttons, those 16 steps will be repeated on all the other steps available in the sequencer, for every channels. Useful for repeating & extending the length of a sequence.

[SYNC OUT]
When the sequencer is playing, it will send CV sync signal for synchronizing other synths and sequencers.

[GATE OUT]
When the sequencer is playing, it will send CV gate signal at each step. This is something that I needed in order to synchronize my DIY modular synthesizer BUT this is really optional if you don’t need it!

The MIDI looper / sequencer sends MIDI SYNC messages! Such as START, STOP and SYNCED TEMPO. And it also receives them! You can synchronise the tempo with other devices this way!

This project is at its first iteration! I want to make a new one with more features and a LCD screen to display some useful stuff, like an “HELLO” message when you power on the device (or some other useful stuff, like displaying the value of the bars or steps when you move the knobs …).

Adding some memory in a SD card in order to save your sequences could be very nice!

I also recently discovered (thanks to the amazing people from the LMNC forum) that I could get over all of my PULL-DOWN resistors by tweaking the code a little bit. Also, adding op-amp buffers to the SYNC and GATE output wouldn’t be a bad thing in order to protect the Arduino’s pins.

If you have an idea about a nice little feature that could be added, please drop me a mail (see the contact page of this website).

I want to thanks a lot Knopsl from Reddit who helped me a lot by troubleshooting the first circuit I drawn! Here is its own creation :